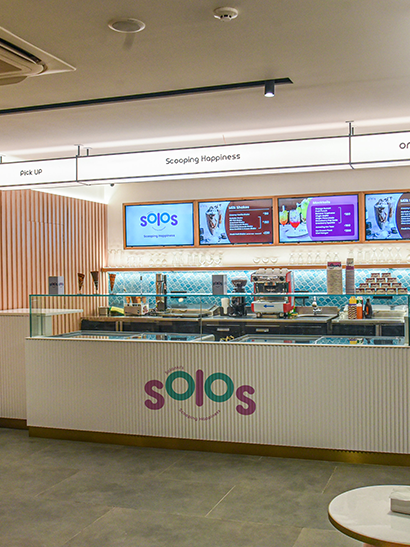 Welcome to the world of Solos

A place where the art of fusion meets deliciousness.

Delicious flavours and excitement go hand in hand with happiness and health in the world of Solos. Crafted with the finest natural ingredients, located in Balewadi High Street, Pune, Solos ice cream will melt in your mouth leaving a smooth after taste. You will find the perfect treat for your taste buds here.

An ice-cream is a sweet delicacy with vibrant flavours & texture. Similarly, Solos is a place located in Balewadi High Street, Pune, that churns positive conversations, a place where people connect to whip out flavourful smiles.

Solos has been making irresistible ice creams for over 75 years, so we think we are good at making them. But you should give it a try for yourself because tasting is believing!

Solos have the secret ingredients in everything. Our rich and creamy ice creams are made with love, purity, passion and delight. Solos by Solanki will use unique flavours inspired from Kolhapur and Maharashtra such as Jaggery, Indian spices etc., to highlight the Kolhapuri roots of Solanki. Now, Solos is ready to amaze you with the best flavored ice creams in Balewadi, High Street, Pune.

One man had a dream of making
the most delicious ice cream.

Initially starting with soda in 1922 in Kolhapur named as Solanki with just five flavours namely Limbu Soda, Vala, Khus, Vimto and Orange. Later in 1925 he thought of expanding the business by starting Lassi, as a result his business was boomed. Inspired by expanding the range of products he later thought of starting ice creams.

It was surprising, but it made sense. He enjoyed a scoop or four of the good stuff and had often expressed his desire to create something with his own two hands, a real product for real people.

Later, in 1947 the Solanki’s Ice Cream Parlour began in Kolhapur. It's more than we could have imagined when we scooped our first cone, and we're eternally thankful to everyone who has helped us get here.

In 1960-65 we had a shop plus a cart where we were serving happiness in the famous palace theater Keshavrao Bhosale in Kolhapur. People loved the ice cream but for him this was just the start.

1970 was the game changer when fruit salad, fruit gel ice cream, cocktail ice cream, falooda were introduced. With vibrant colours, unique textures & flavours now Solos has been crafting natural ice creams with a twist of Indian tradition to create curiosity and excitement to try out the best ice cream flavours for their consumers in High Street Balewadi, Pune.

Solos feels that ice cream should be eaten rain or shine, so we're open all year round. Come see us whether you want something delicious in the winter or a sundae on a hot summer day! Solos is always here for you to not only serve the best but also the healthy ice cream across Balewadi High Street, Pune.

We think that we are capable of showing 'Greatness' in everything we do, and that Personal and Professional Integrity, Respect, and Understanding for everyone are vital parts of the overall 'Greatness' we believe in.

We feel that happiness, as well as supporting all employees in being happy, is essential to achieving 'Greatness' in all we do. We think that our own satisfaction is deeply connected to the happiness of our customers. We think that pleasing our consumers and giving them happiness and joy brings purpose to our lives. There, both individually and as a team, we find happiness.

Optimism in safety and sustainability

We believe in making and selling products that are safe and healthy for human use, while also showing the utmost care for the health and safety of everybody, as well as the safety and sustainability of nature and our environment. We look forward to not only serving the best but also the healthy ice cream across Balewadi High Street, Pune.